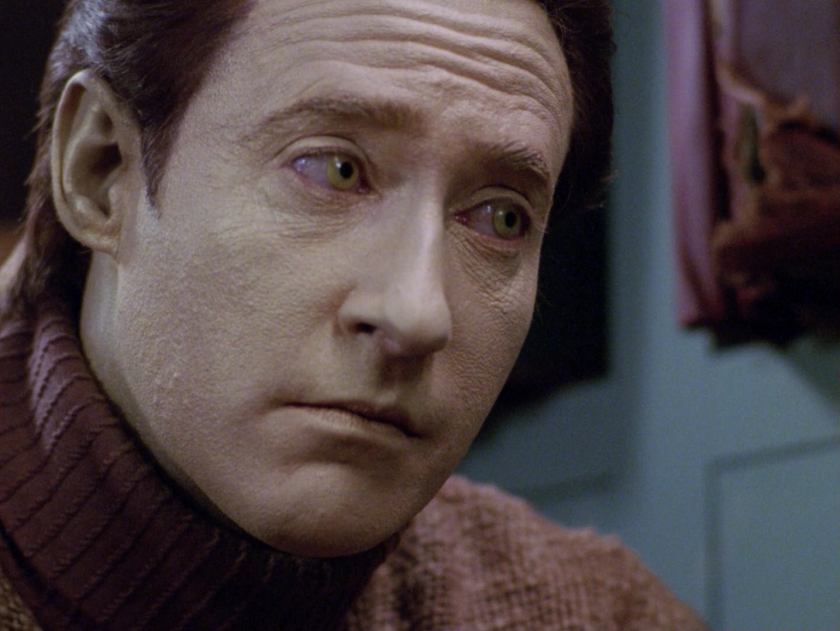 Once again we are dealing with family – in this case Commander Data’s.  The Bplot is that the Potts brothers have gotten in trouble after a prank went too far and now the youngest is in seclusion because of a parasite.  Although why would they have such an infectious plant just handing around the common areas of the ship, I don’t know.  But Alas, poor baby Potts has a parasite that only a Starbase can take care of.

Of course, Data’s family is not noted for their timing.  Data’s homing beacon is activated, and he takes the ship on a joy ride to visit his ‘father’ Dr. Noonien Soong.  Dr. Soong, long believed dead, is actually alive and well, maybe not well but he’s got some stuff to do.

Side note: This episode is perfect for reaction pics/gifs.  Picard’s “I’m done with this” face was perfect.

Soong has brought Data to his lab because he is dying and his last wish is to give Data the chip that will allow him to process emotional input, something he failed at when it came to Lore.  Who, as it turns out, also has a homing beacon and has arrived at Soong’s lab.  Soong is surprised, thinking Lore to be stuck on a shelf still.  Lore, as usual, is upset.

I feel this episode allowed Brent Spiner a lot of leeway as in how he could act.  We have Data, who is emotionally disconnected (I still hold the belief he can hold some emotion), Lore who is emotionally unstable and prone to anger and Soong whose dying and has his two mechanical sons* to deal with.  Technically I imagine was difficult to film since the actor had to basically act with nothing and then switch parts.  They would have had to do some editing later to meld the scenes together.  I think that’s why a lot of scenes have the three sitting apart enough from each other they won’t be in the same scene.  They could use a stunt double for the back of heads, or arms, but there were a few scenes where the characters interacted on screen.

I’m giving this a 5/5 because I think everyone did an excellent job, even Rick Bergman who I’m a little iffy on his production choices.