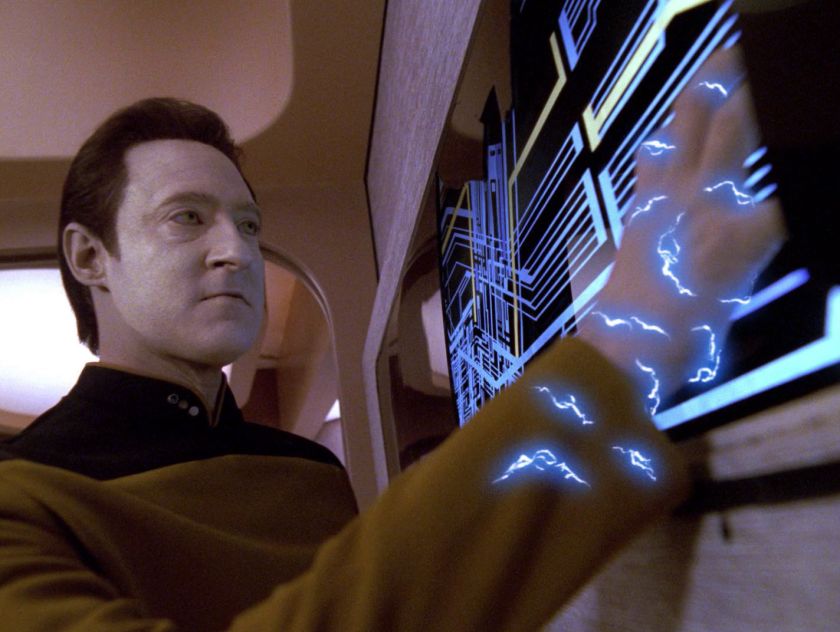 Notable Guest Stars:
This episode is largely a bottle episode, taking place mostly with actors already on the show (main and reoccuring) and on already built sets. All the notable guest stars for this episode are reoccuring guest stars, which I stop mentioning after an episode or two.

Weirdly enough, this episode is one of my favorite episodes of TNG. I think it might have even been one of the first ones I ever watched as a child.  In this episode Energy life forms take over the bodies of Data, Deanna and Miles and try to hold the ship hostage. They play on the crew’s curiosity about the loss of the Essex, a ship lost with all hands about 200 years ago (so perhaps shortly after ENT era).

It’s a great action episode, with a good mystery.  You keep having to guess if they really are the crew of the Essex or not.  And its always interesting when the actors are given a new character to play. Brent Spiner gets to get a little out of the restraints of Data, playing an aggressive violent character.  Colm Meaney plays someone also a lot more aggressive than he normally plays as Miles.  It was however a little creepy to see Fake!Miles harass Kieko like that.  Keiko at the end of the episode seems rather calm for being mishandled by an alien abducting her husband’s body.

Marina Sirtis gets to play a command role, and its very distinct from Deanna despite only a few minor changes to her voice and speech patterns.

So this episode has excellent work by the actors, the writers made a interesting story and it all came out to be quite a nice episode.