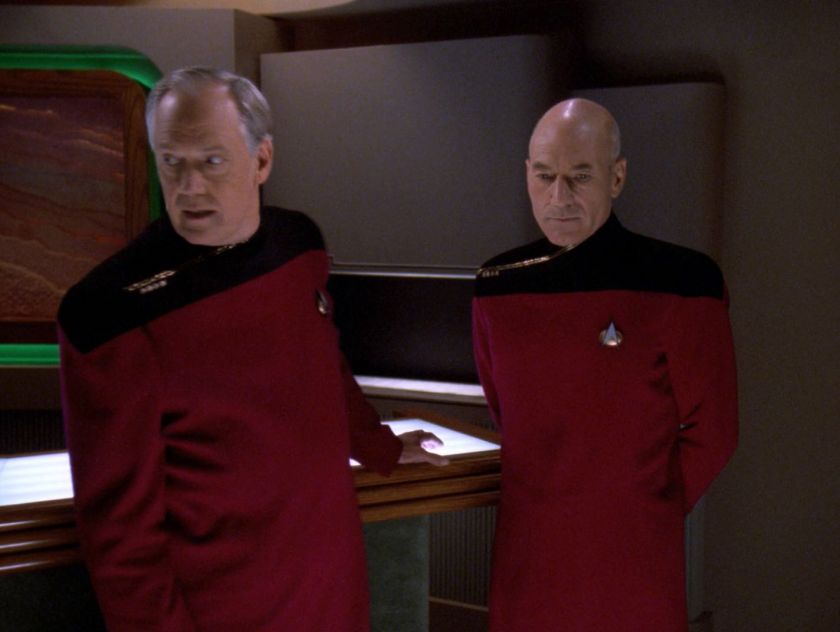 Notable Guest Stars:
Ronny Cox (Edward Jellico)- I know him best as Senator Kinsey, the thorn in the side of the Stargate program.
Natalia Nogulich (Alynna Nechayev)- She will return as Nechayev several times over the course of TNG and DS9.  She has also appeared on the West Wing as an Israeli ambassador.
John Durbin (Gul Lemec)- Durbin will appear on DS9 and Voyager as various characters.
David Warner (Gal Madred) – David Warner previously was in the Undiscovered Country as Chancellor Gorkon.  He had also previously worked with Patrick Stewart on a performance of Hamlet.

Warning: This episode contains possible triggering content such as torture and gaslighting. When watching it has graphic torture scenes.  My review also references them, though I will not describe them in detail.

This duo has a lot to unpack. It’s a fairly important episode Franchise wise for a couple of reasons. There are several character development scenes in these episodes from a TNG standpoint. It also sets the stage for DS9, which will premiere next (and shall be Rewatch 209).

Admiral Nechayev comes onboard the Enterprise to surprise Picard with a special mission to go undercover and seek out a possible metagenic weapon which makes current biowarfare seem like toys. He is relieved of duty as Captain and Edward Jellico, a more by the book and militant style Captain is brought in to relieve him.

Jelico is a bit of a debate.  Some fans feel he was an amazing captain, others fell the opposite. I’ll get to my own opinion in a bit.  Regardless he makes an impression because as soon as he transports over, he starts to change the way the ship works. He wants them to switch up their duty schedules into four shifts rather then three.  Which honestly doesn’t quite make sense.  A four duty shift means six hour shifts. It would spread the crew more thinly, and also seems a waste of resources.  But he’s preparing for war, so perhaps he’s trying to make sure everyone is well rested in case of battle.

He also has requests of each department that sometimes borders on incompletable.  For example, despite Data saying it was an attainable goal, Geordi knows it will take the whole department two days of round the clock work to complete.  And Jellico removes part of the tema for security.

Isn’t there already a security department on board?

Its hard to tell with Jellico if he’s just being premptifully prepared or just has unrealistic expectations of his crew on an larger ship.  Either way it puts him at odds with Riker, who is more of a relaxed command structure kind of guy.  Which is good for the Enterprise because it’s a science ship, and he knows his crew and when to be more firm then others.  Might not be so great when it comes to militiarlistic situation.  That being said, Riker has already shown he can take command of those situations.  He did so in The Best of Both Worlds.

Jelico also makes Deanna wear a uniform, which is probably my favorite thing about this whol episode.  It always bothered me that Deanna never wore her uniform unless it was in an alternate timeline or the first episode.  It has been argued that she wears something to make her patients feel more comfortable, but always?

Meanwhile while Jellico and Riker are fighting (and Deanna playing mediator) Picard, Crusher and Worf are all sneaking into what is supposed to be a Cardassian lab.  Except it was just a lore to get Picard.  To get information about a planet they want. Information that Picard does not have.

Picard is tortured in this episode both mentally and physically.  He spends a portion of this episode strategically placed as he is nude.  They don’t shy away from the fact that this is in fact a torture scene. The most popular phrase to come out of this episode is “THERE. ARE. FOUR. LIGHTS.” It comes from when Picard is being tortured while being asked how many lights there are.  He is tortured to the point that he admits (later to Deanna) he almost gives up and says there are five lights just to get relief.

.I do think it is important that afterwards he goes to talk with Deanna. He seeks mental health services, instead of the usual “forget anything happened to him before this” situation that TV dramas seem to take as their go-to.   He’s seen seeing his therapist, even if it seems like he’s just sitting down with a friend. I think that is a very good sign.  I wish that TV shows would show their heroes seeking mental health help when they need it.

This episode develops Picard, as information of his past come to light. Some of which we already knew, some of which is new. It definitely showcases his character, and how he deals with things. He is rescued before he breaks down from the torture, but he still admits at least to Deanna that he was close to just believing there were 5 lights.

It develops Riker to a certain point, because it shows how willing he is to rebel when he doesn’t think the commanding officer has the best interests of the crew in mind.  Although I do think that he’s a little reactive in this episode, considering he himself has had to deny going back to get someone till after they finish something else.

I do find it funny that all of a sudden he is the best pilot on the enterprise but we hardly ever see him fly anything.