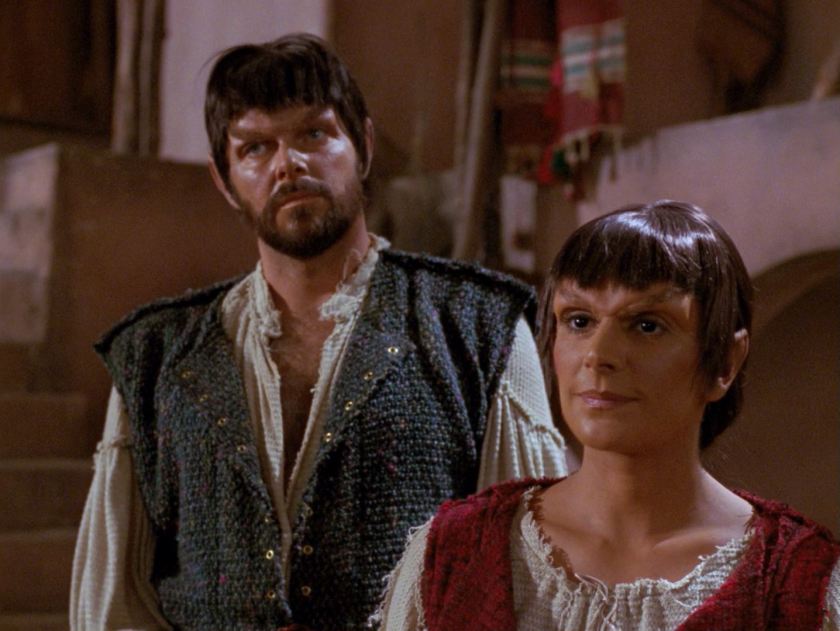 Kathryn Leigh Scott – Nuria. She played Maggie Evans on Dark Shadows.
Ray Wise – Liko. He most recently played Marvin on the TV series Fresh off the Boat.
James Greene- Barron. He appeared in the 1980s drama Alien Nation which was apparently cast with several guest stars from Star Trek.
Pamela Segall -Oji. She has many many credits. I had to scroll a bit on her IMDB to confirm the Star Trek credit. She does a mix of live action and voice acting. She has appeared in Pete the Cat and This is Us in the last few years.
John McLiam – Fento. He also has several credits, particularly in TV westerns, but he also had a bit part in the Audrey Hepburn version of My Fair Lady.

This episode explores the Prime Directive in a different way.  A group of anthropologists have been observing a group of Mintakins, a Vulcan like race (although they seem to lean towards the Romulan side of the family in looks)still working its way through early development.  They have set up a observation station with a holographic shield to keep themselves from interfering.  However, the station breaks down, and it exposes them.

The Enterprise has to access the damage done and recover the survivors from the planet because its now clear that the people in near by village are aware of their observers. It gets worse when one of them spots Beverly beaming up with an injured scientist who was thrown from the station after the explosion.

As you might guess, things get worse….quickly. After all we only have 44 minutes.

Picard ends up being thought of as a god and he has to find a way out of this mess without damaging their development anymore then it already has.  It’s a very hard thing to do.  Of course the episode has a happier ending where the people realise he isn’t a god. And seem fine afterwards.