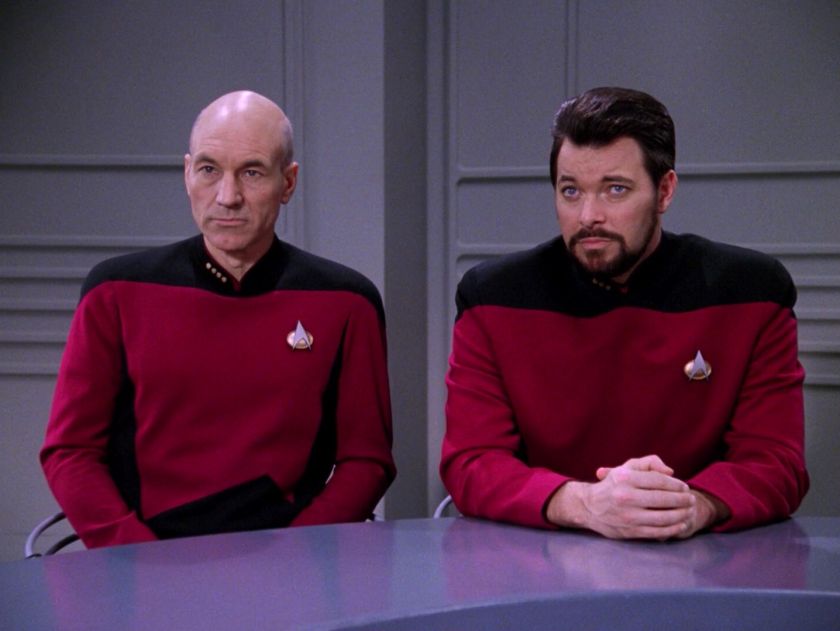 Craig Richard Nelson – Krag.  He had an recurring role in the TV series Square Pegs, and appeared in the 1989 film Honey, I shrunk the Kids.
Mark Margolis – Nel Apgar.  He earned a Emmy nomination for his role in the TV series Breaking Bad.
Gina Hecht as Manua Apgar.  She is known for her role on Mork & Mindy,and more recently as a Judge on General Hospital and Puck’s mother on Glee. Which I actually watched a season of recently (before deciding not to continue).
Juliana Donald –Tanya. She would appear on various Trek episodes, and other scifi shows like Babylon 5 and the X-files.

Time to sharpen our Federation law knowledge, because we have another episode that is basically a courtroom scene.  This episode was supposedly influenced by the 1950 Japanese film Rashomon.  The plot theme from the movie was various characters giving their versions of the story, and each story doesn’t fit the same narrative.  In the episode, Riker is accused of killing Dr. Apgar on his station because he was infatuated with Apgar’s wife.  The local authorities want him extradited to stand trial, but Picard asks that the investigation/interrogation happens on Enterprise, not willing to send his perhaps innocent first officer down to the planet without knowing the truth.

I agree with the one reviewer who felt that this episode would have been better served by another character being placed in the accused position.  We all know Riker is innocent – he’s a main character and since we are in the future of the show we know he’s still on Enterprise for another decade or so. A minor character might have made us wonder if he was innocent or not.

I do feel that this plot theme is overused in Star Trek.  I know that Voyager had a similar episode with almost the same core crime (Ex Post Facto) and I can’t recall exactly at the moment but I thought there was a episode in DS9 featuring Jadzia.  Stargate also used this theme in an episode featuring Cameron Mitchell as the inflected.  Both Stargate and Voyager had the added element that had forced memories on the victim.