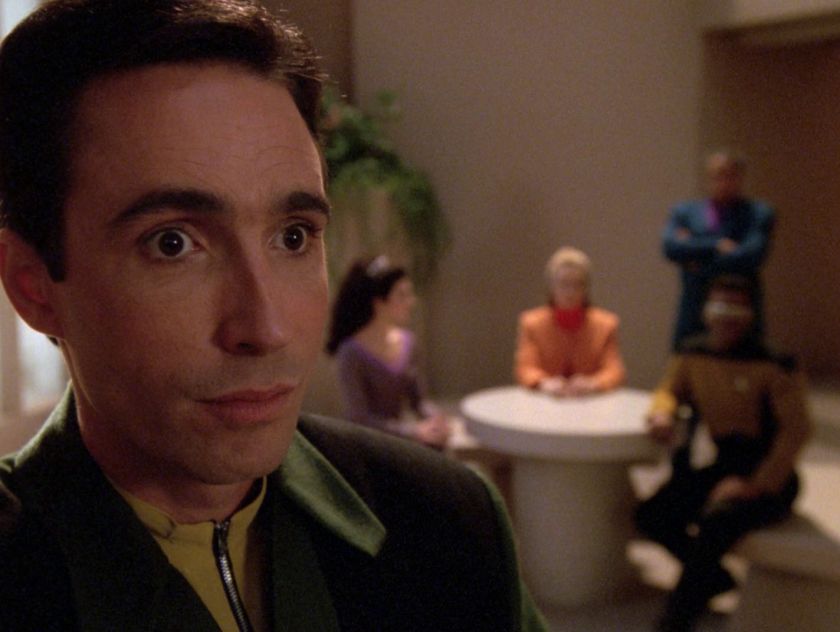 Notable Guest Stars:
John Snyder (Aaron Conor) – Synder is a repeat actor on Star Trek.  He originally was on the show as Bochra, a Romulan officer.

Ron Canada (Martin Benbeck)- Canada is often on screen as a member of law enforcement, such as he is here as Martin Benbeck.  He started his career as a journalist and won awards for his work. He also appeared as West Wing as a Secretary of State.

Dey Young (Hannah Bates)  Like Synder, Young is a repeat actress on Star Trek.  This is the first of three appearances. She also appears on DS9 and Enterprise.

Star Trek has over the years made many episodes where they deride genetic engineering as “ruining humanity.”  This episode is no different.  Enterprise comes across a biosphere community living on a lifeless planet in the direct path of a “Steller fragment”. In the biosphere is a community of genetically engineered people each manufactured so to speak to hold different roles in the society.  The weight of each person’s role makes it hard for the community to survive if there is too much disruption -such as a large number of fatalities or people leaving the community.

Of course, there is a stellar fragment (something that does not appear to apply to real science) on its way to devastate the colony.  Enterprise decides to help them out, believing it was their responsibility to evacuate the populace.  The citizens are reluctant to participate, believing that no one should come into the community or leave it.  However, their leader is convinced to allow the assistance of the Enterprise.

There is an awkward romance between Deanna and Aaron Conner, which ordinarly I wouldn’t mind.  They have the chemistry but given the placement of this episode I don’t really care for it.  It comes right after Deanna was given what essentially was a rape episode and they failed to show any remembrance of it afterwards.  I doubt Deanna would be so outgoing to someone after an experience like that.  They could have shown her slowly opening up to him, making it more natural and less like she decided to go after him from the start.

Also:  She claims they can not be together due to her job and ethics, yet the show seems to forget this at other times in the series, giving her dates with men who are distinctly her patients, such as Barclay, and later Worf who while her friend is also very clearly a patient.