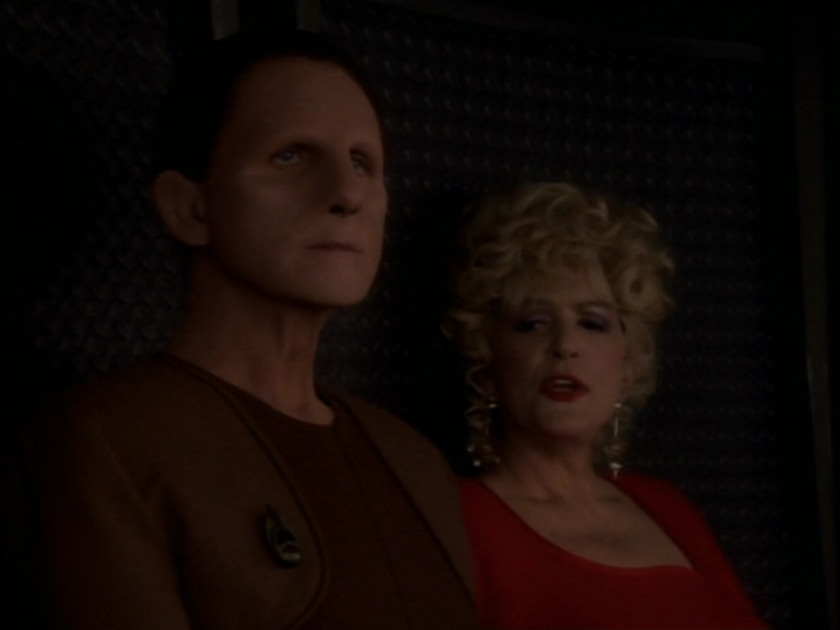 Jack Shearer (Vadosia)- This is Shearer’s first appearance in Trek, but he would appear in several more episodes and a film. His most notable character being Admiral Hayes as seen in Voyager and First Contact.

Constance Towers (Taxco)- Towers is a Julliard Graduate, as well as the Academy of Dramatic Arts. She appeared in several of John Ford & John Wayne’s westerns in the late 1950s. She appeared on various television shows, including Soap Operas and of course Star Trek. She continues to be active with a recent role on 911: Lone Star.

Michael Ensign (Lojal) – Ensign is a character actor who has appeared in many many things, including Titanic.

Benita Andre (Anara) – Like Ensign, she is a character actor who has appeared in several well known television shows. This was her only appearance on Star Trek.

END_OF_DOCUMENT_TOKEN_TO_BE_REPLACED 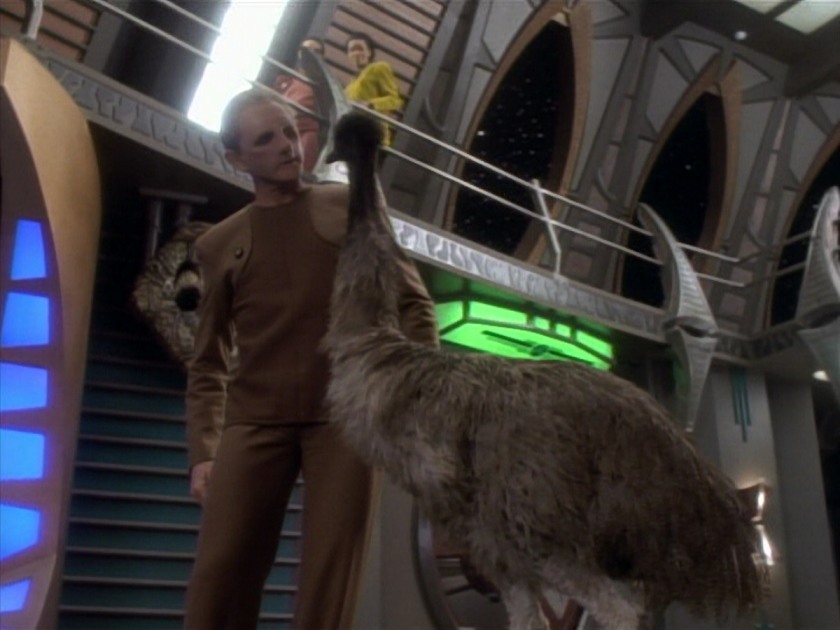 Pausing a Moment to Remember Louise Fletcher, who was a remarkable actress and DS9 would not be the same without her.

Notable Guest Stars:
Keone Young (Buck Bokai)- Young is known for both his live-action and voice work. I can’t say I’ve seen any of his scenes in the live action credits to his name, but he did voices for Mulan II and Sofia the First.

Michael J. Anderson (Rumpelstiltskin) – Anderson has appeared on shows such as Twin Peaks and Carnivale. But as an more important factor, he was a NASA tech operator before he went into acting. Which makes the scene where Rumpelstiltskin asks to help O’Brien amusing as the actor probably could have helped.

I can’t say this is one of my favorite episodes, and to be honest it has all to do with the Alternative Dax. To be honest DS9 in general has a history (or will as we are in season 1) of turning sexual elements into the creepy realm (see: All Mirror Universe Episodes).

END_OF_DOCUMENT_TOKEN_TO_BE_REPLACED 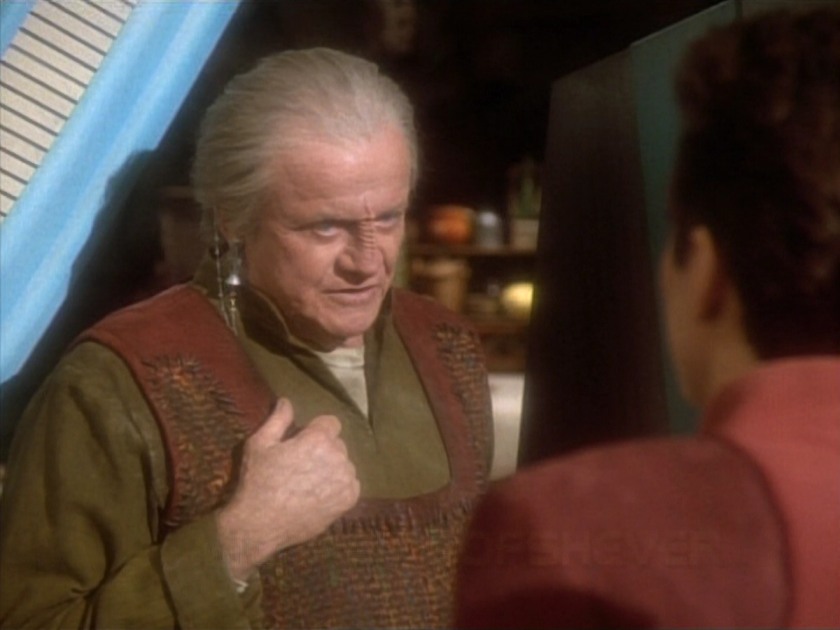 Brian Keith (Mullibok) – Brian Keith is a classic film actor most known for being the father in The Parent Trap (1961) and Family Affair. He has a long list of credits and there is probably a film for all tastes. He died in 1997.

Terrence Evans (Baltrim) – This is Evans first time on Star Trek, but far from his last. He also worked on Gunsmoke, one of the longest running TV series from the 60s. He died in 2015.

Annie O’Donnell (Keena) – More recently she’s been seen in Fresh off The Boat and The Big Bang Theory, but I know her best for a small role she had on Nightcourt along side Brent Spiner as the Wheelers.

Daniel Riordan (Guard) – Riordan is a Star Trek Alum, having played the character Rondon in an early episode of TNG,and will eventually play Duras (Another member of the Trouble House). He also has provided voices for many animated features.

Michael Bofshever (Toran) – Recently he has been seen on The Young and the Restless. He has also been on The Shield, Breaking Bed, The West Wing, CSI (the original), 24, and a future episode of TNG. His first role on Star Trek was in The Undiscovered Country.

This has Brian Freaking Keith, guys. Not only is this a Kira heavy episode, but we have an actual classic film star on set.

This episode has the traditional 2 story plot, with plot A being Kira’s adventures with the most stubborn Bajoran on the planet. Plot B is another adventure of Jake & Nog take on DS9: Profit edition.

END_OF_DOCUMENT_TOKEN_TO_BE_REPLACED 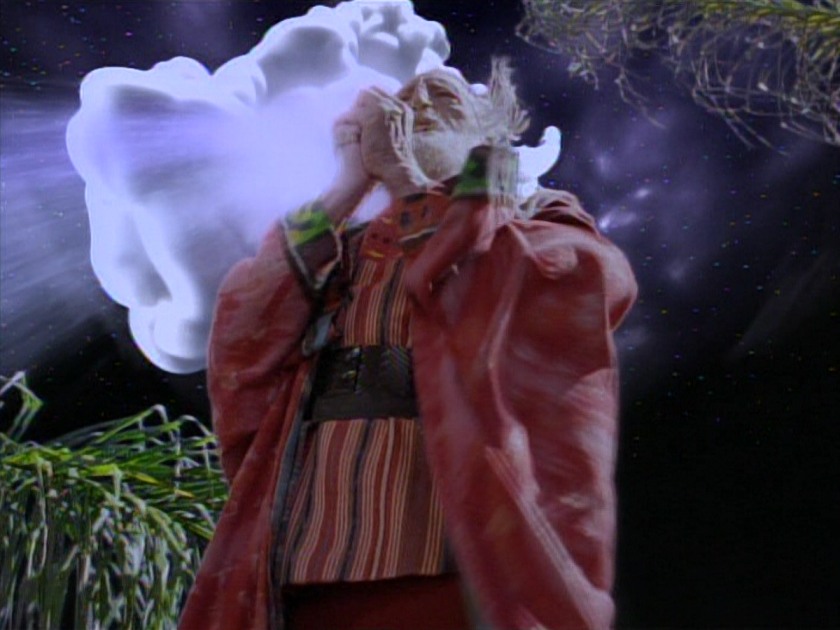 Gina Phillips (Varis Sul) – Phillips is a child actress who grow up on screen. She later became known for her roles in Jeepers Creepers and Ally McBeal. She also appeared on ER (I feel a theme today).

Jordan Lund (Woban) – Lund has appeared on Star Trek: TNG before as Kluge in 1991 and he shall appear on Enterprise in 2003. He appeared on both Chicago 90s Medical dramas Chicago Hope and ER.

Kay E. Kuter (Sirah)- When I was a kid, I watched alot of old programs because that was what my dad liked to watch. Its how I got into Star Trek for one thing. I also watched shows like Petticoat Junction and Green Acres both which had Kuter in them. He was also in the 1954 version of Sabrina (I much prefer the 90s version, but its still a good movie) He also appeared in ER (I told you, there is a theme today) Kuter died in 2003.

Jim Janson (Faren) – He appeared familiar to me but I couldn’t tell just where I saw him till I looked up his filmography. One of my favorite shows was Gilmore Girls and he appeared occasionally as Reverend Skinner. He also guest starred on Veronica Mars, The Mentalist, West Wing, and yes, ER.

Lawrence Monoson (Hovath) – He appeared in a 1994 Television series And the Band Played On, which was a docudrama based on the early years of the HIV/AIDS epidemic. It starred Alan Alada, Matthew Modine, Ian McKellen, Lily Tomlin and Richard Gere. You know he was among good company. I do recall watching this during school but I’m sure if it was a history class or a health class.

In this episode we have the first episode of “The Continuing Adventures of Julian & Miles” as well as Nog & Jake being children. Its not really the best of episodes, but its also not a bad episode.

END_OF_DOCUMENT_TOKEN_TO_BE_REPLACED 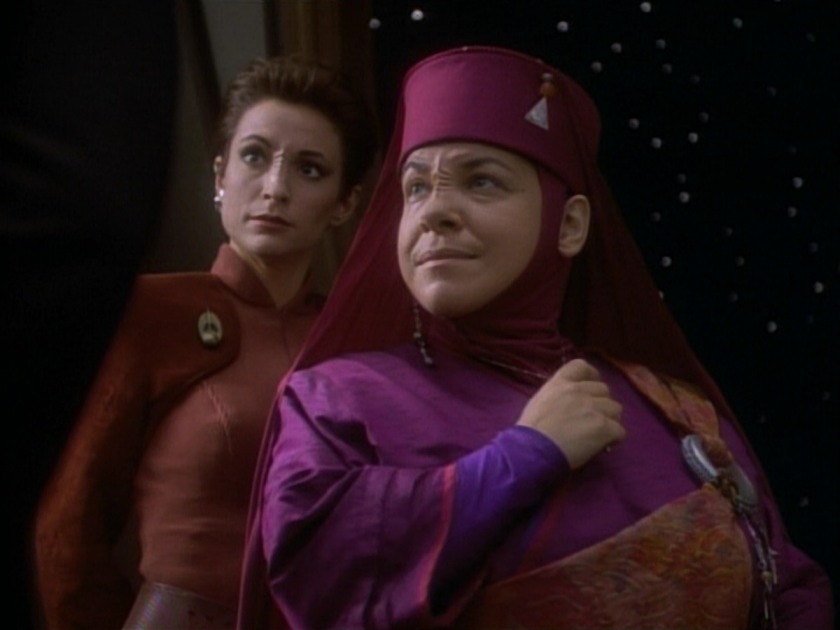 Jonathan Banks (Shel-la) – He is better known for his roles on Breaking Bad and Better call Saul, both of which earned him Emmy nominations. He was also in the 1995 film Flipper, which was one of my first films to see at an actual theater (other than the little mermaid).

Paul Collins (Zlangco) – He is best known as the original voice of John Darling from the 1953 film Peter Pan.  He would later appear on JAG, West Wing, and Guiding Light.

Camille Saviola (Kai Opaka) – Saviola worked in a variety of mediums, including having a record contract to sing Disco. She appeared in the 1993 Adams Family film, Addams Family Values. She appeared in 2004 on ER, another show I like to binge watch, as one of the temporary Desk Clerks.  Sadly, she died in 2021 of heart failure.

This is one of my favorite episodes of season one.  I love Kai Opaka and I really wish they had her come back for scenes later on.  Its also a very good episode for characterization for the three main characters: Kira, Sisko and Bashir.

END_OF_DOCUMENT_TOKEN_TO_BE_REPLACED 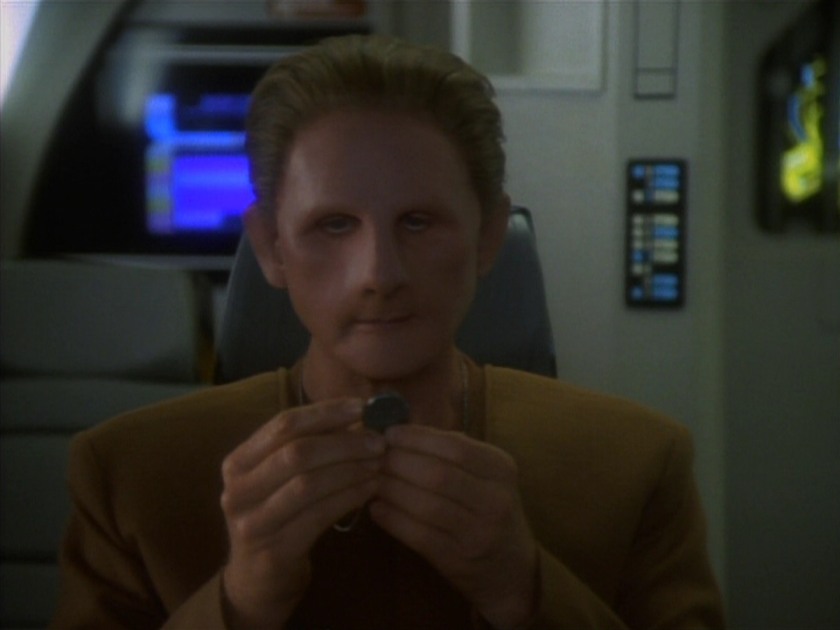 Cliff DeYoung (Croden) – He has appeared on West Wing and JAG.  He also appeared in one of my favorite war movies, Glory (1989)

Randy Oglesby (Ah-Kel/Ro-Kel) –Ogleby will be reappearing in many Star Trek episodes, including a recurring role in Enterprise as Degra.

This is one of those episodes where Its very important to the overall arc of the series, but otherwise is largely forgettable. This episode delves into Odo’s sense of self, and his desire to learn more about the people that he belongs to.

END_OF_DOCUMENT_TOKEN_TO_BE_REPLACED 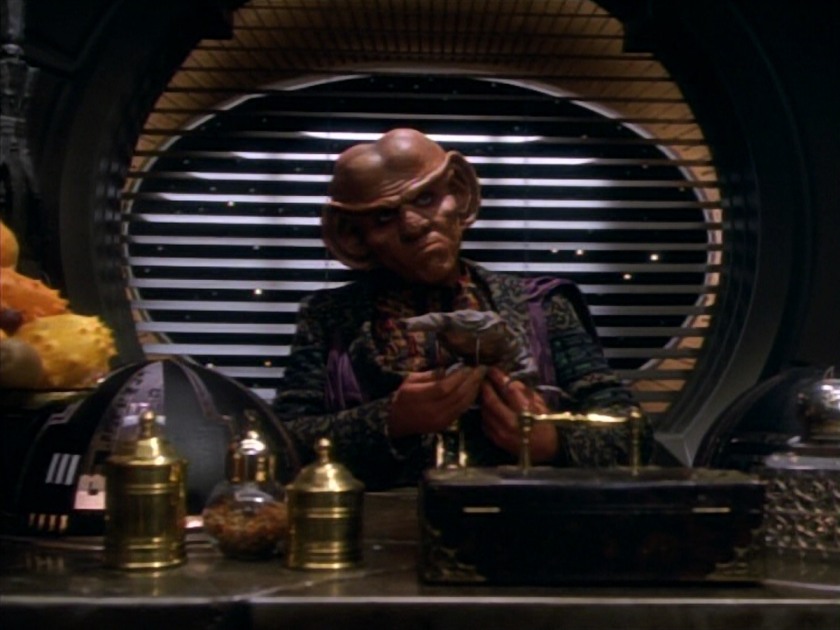 Notable Guest Stars:
Max Grodenchik (Rom) – Grodenchik has played several Ferengi characters over the years, but his most lasting and most known role is that of Rom, Quark’s brother.

Aron Eisenberg (Nog) – Aron Eisenberg makes his first appearance as Rom’s son Nog in this episode.  Nog has one of the best storylines in the series, so pay attention to this character (and actor)

Wallace Shawn (Grand Nagus Zek) – Wallace Shawn of “Never fight with a Sicilian When Death is on the line!” fame has been one of my favorite guest actors.  I love him as Zek, and I also loved his roles in the aforementioned Princess Bride,  as well as Clueless and Crossing Jordan where he plays the titular character’s therapist for a few seasons.

Lee Arenberg (Gral) – Lee Arenberg more recently might recongised as Grumpy, from Once Upon a Time and as a member of Black Pearl’s crew in Pirates of the Caribbean.

Barry Gordon (Nava)- Gordon was a actor, Talk show host, and SAG president from 1988-1995 (which would mean as this episode was made and aired).  He also did voice acting, and therefore part of my first fandom obsession:  Teenage Mutant Ninja Turtles.  He did the voice of Donatello.  He has been acting since he was three years old and continues to be active in the field.

Tiny Ron Taylor (Maihar’du) – Taylor will also appear on Star Trek Voyager.  He tends to be typecast due to his very tall height of 7 feet.  He was also a professional basketball player, even playing on the rarely known Pittsburgh Condors.  Well, that may be because they only lasted about five years.  Unfortunately, he died in 2019.

END_OF_DOCUMENT_TOKEN_TO_BE_REPLACED 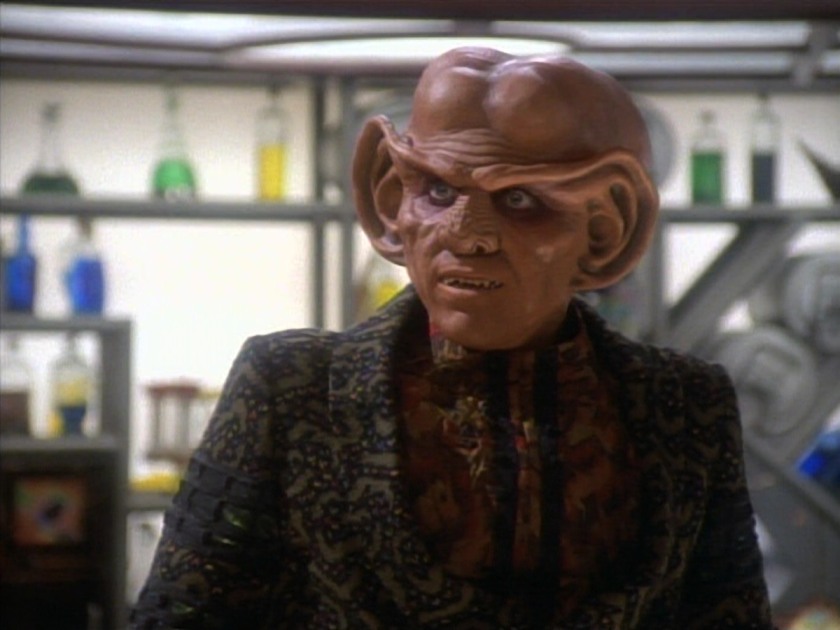 Notable Guest Stars:
Joel Brooks (Farew) – Brooks is a long-time character actor. He has appeared in many series over the years in quite a variety of characters. Some shows that I have watched with him in it include Sabrina: The Teenage Witch, and M*A*S*H. He now splits his time acting with teaching acting classes.
Clara Bryant (Chandra) – Bryant was a child actress who at 24 decided to retire from acting and became a Lawyer. She did make a series of appearances on Buffy The Vampire Slayer from 2002-03. He last film was the Syfy film Bone Eater with Bruce Boxleitner as the lead.

END_OF_DOCUMENT_TOKEN_TO_BE_REPLACED 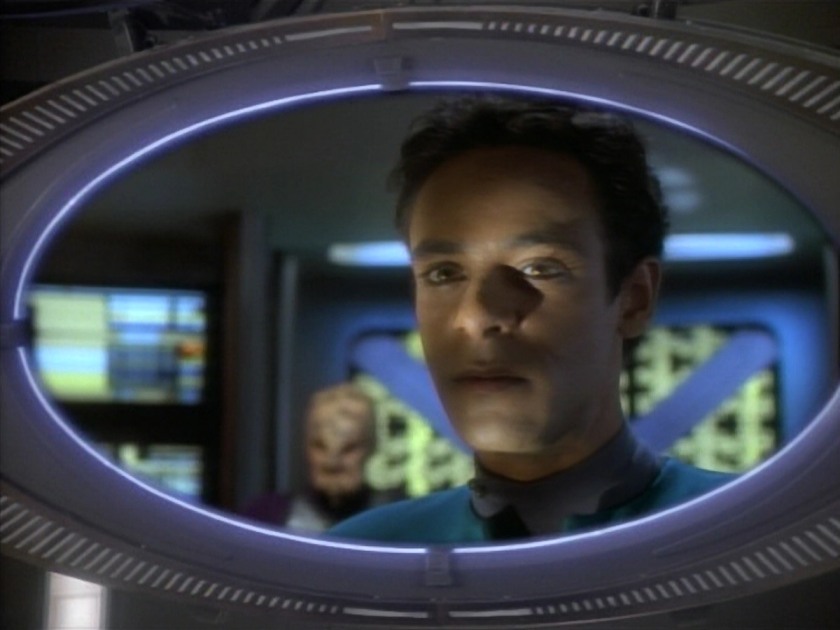 Notable Guest Stars:
Caitlin Brown (Ty Kajada)- She appeared in Babylon Five, which is often compared to DS9. She also appeared in TNG, starred the horror film All about Evil.

James Lashly (Lt. George Primmin)- Lashly appears in so many of the shows I watched growing up yet I really never noticed him which I now need to fix.  He appeared on Gilmore Girls, Bones, Charmed, Judging Amy, Wild Wild West, ER, Pretender, and also TNG (3 years prior).

Christopher Colins (Durg) – Colins has a long voice acting filmography, including being the Cobra Commander on GI Joe, and the original Mr. Burns (exxxxelllant).  Unfortunately, he died from a hemorrhage in 1994, a little over a year after this episode aired.

James Harper (The Original Rao Vantika)- He was in the 1998 hit film Armageddon and has been known for being the voice of Arcturus Mengsk on StarCraft video games.  He also did a spin on General Hospital in the late 2000s.

END_OF_DOCUMENT_TOKEN_TO_BE_REPLACED 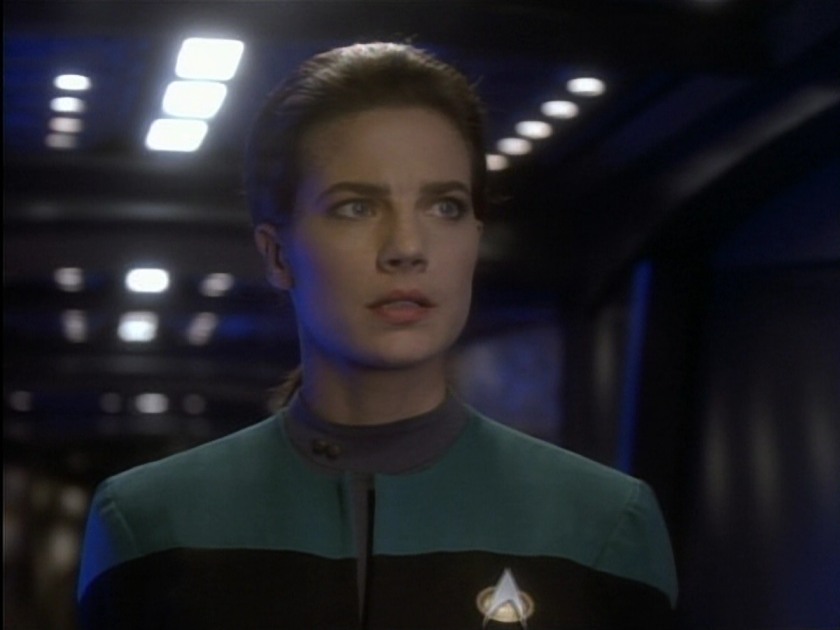 Notable Guest Stars:
Gregory Itzin (Illon Tandro) – He is known for his role in 24, appearances on Friends, and several episodes of Star Trek over the years including DS9, Voyager and Enterprise.
Fionnula Flanagan (Enina Tandro) – Flanagan played several roles on Trek over the years, including that of Juliana Soong, Data’s “mom”. Some of her other notable roles include Devine Secrets of the Ya-Ya Sisterhood and Transamerica,
Anne Haney (Judge Renora) – She previously played Rishon on TNG.  She is also known for her roles in Mrs Doubtfire and Mama’s Family.
Richard Lineback (Selin Peers) – Another Star Trek alum, he played roles on DS9, TNG and Enterprise.  He also plays the father in Twister, one of my favorite childhood films.
Spice Williams (Klaestron Kidnapper) – Spice Williams is a reoccuring face among Star trek, having guest starred as several characters over the years as well as working on stunts. In this episode she gets to beat up Julian Bashir. She is also the sister-in-law of Denise Crosby (Tasha Yar)