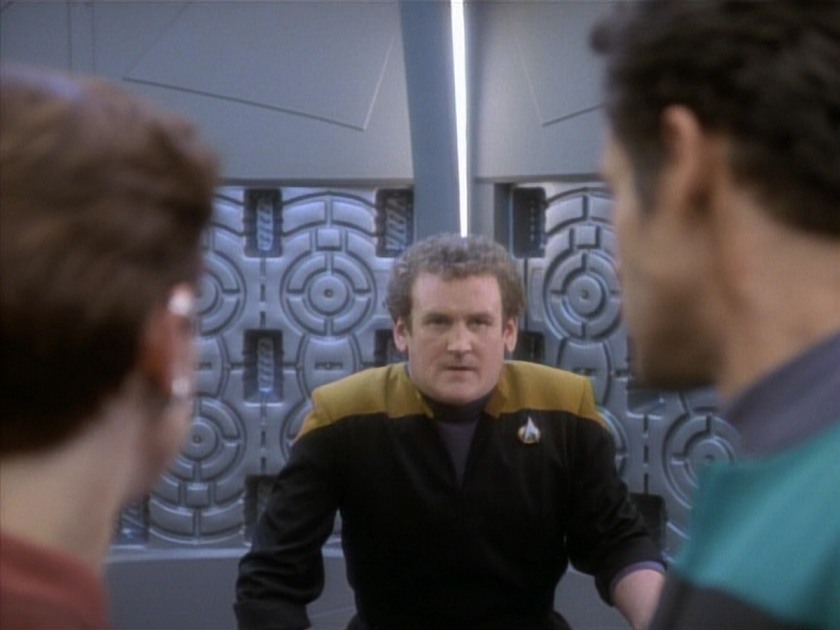 Notable Guest Stars:
Jack Kehler (Captain Jaheel)– Kehler is a member of the Actor’s Studio.  A recent credit for him includes the Amazon hit series The Man in the High Castle.  He has appeared in smaller roles across a spectrum of popular tv shows.
Ann Gillespie (Jabara)- Gillespie has appeared in several hit tv shows, including Gilmore Girls, 90210, and Ryan’s Hope.  She currently works as an Episcopal Priest.

This episode is amusing at first. Miles is found rushing around the station, repairing this and that and trying to do without the man power needed because so much just needs done.  However, when he repairs the replicators, he inadvertently activates a device.

The device releases a viral containment into the food, and later air of the station, causing a brain infection that causes aphasia.  Aphasia is a real illness, and it actually can be caused by a brain infection.  It is nice to see easily provable science on Star Trek. Trek is good at inspiring the future of technology, but isn’t always up on the current medical know how.

However, when researching what Aphasia is, the type seen in this episode appears more like Paraphasia, in particular Wernicke’s aphasia. https://en.wikipedia.org/wiki/Receptive_aphasia  I have linked to the Wikipedia on it because there is a lot of information to take in, and not all of it can be related in a episode analysis/review.  Memory Alpha comments that it is related to “Global Aphasia” but that doesn’t seem to fit considering the characters are able to talk- its just not the right words. However, it does affect a similar part of the brain. Either way, this episode actually has a sound scientific backing for its plot line.  The Bajoran underground set up a biological weapon against the Cardassians, only it ended up hitting their own people.

This episode does set up a few things.  Once again, its established that the way the Ferangi brain is organized is different then most humanoids. Betazoids find them hard to read, and they don’t seem to get the brain infections the rest of the species seem to have.  Another aspect is that Julian Bashir is a pretty smart guy.  In fact, at the end of the episode its implied that Julian wasn’t far from finding out the antidote when he himself got hit by the side effects.

On the other hand, this episode also has a weird “The virius becomes deadly” twist that never really seems to pain out.  Maybe if they had shown someone nearly dying before being administered the antidote, it would have felt more threatening.  Instead it appears for only a few minutes of the episode and then isn’t really touched again.

The episode title is a reference to the biblical story of the tower of Babel, where God scattered people and made their languages different. Which makes sense, given the storyline. There was also an episode of TOS called “Journey to Babel.” Where The Enterprise is taking delegates to a conference between peoples.  There is also an episode of Enterprise called “Babel One”  The other two episodes are much more related to each other. “Babel One” is also a meeting between the Tellerites and Andorians on Enterprise.  Oddly, I don’t recall either of those species being seen on DS9 in this episode.