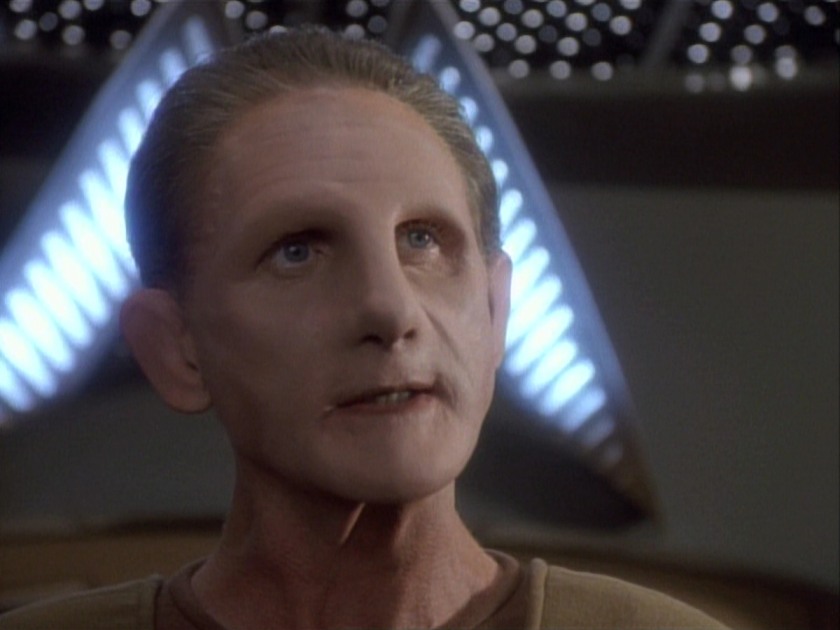 Notable Guest Stars:
Max Grodenchick (Rom) – This is Grodenchik’s first appearance as his most reoccuring character Rom.  Since he and Nog are both Regular characters on the show, I probably will not be mentioning them as notable Guest stars.  Grodenchik has played several characters over the course of Star Trek, including a Ferengi in TNG the year prior to DS9.
Aron Eisenberg (Nog)  This is his second appearance but he will appear several more times over the course of the entire series.  As  such after this I consider him a regular character and no longer a “guest” character.
Rosalind Chao (Keiko O’Brien)  Kieko finally appears on the show!  Like the previous two, she appears enough on the show to make her a regular and no longer a guest star.
Mark Allen Shephard (Morn) – One day I need to figure out how often Morn, Quark’s most frequent customer, appears on the show. He is also an artist whose work has been used on the sets of DS9.
Stephen James Carver (Ibudan 1,2,3) He has appeared on several episodes of TNG, and in the film Liar Liar as a police officer.
Edward Albert (Zaya) – He has an extensive credit list, but I do recognize Dr. Quinn.  He also is an advocate of Native American Rights. Unfortunately he died in 2006 of lung cancer.

This episode is a very good episode for the inter-cast relationships, in my opinion.  The first part of the episode was spent exploring several distinctly different relationships.

One thing I find fascinating in this episode is that they have Keiko and Miles discussing things like an actual married couple.  There is no false sense of drama.  Its an actual normal conflict a military couple might experience.  Keiko gave up her job when Miles got the promotion, so she is at a loss on what to do on the new base.  She is unhappy and Miles tries to come up with things she can do, or options he could take to make things better. Its not a Star Trek specific thing. This is something in our current lives we can recognize.

As the episode goes on, their interactions seem so natural, these two actors work well together.  Its really nice to see a happily married couple on Television with just the drama that is caused by the same things average people have drama in there lives.

Another recognizable relationship is Jadzia and Julian. I have to admit I find his perusal of Jadzia in the first season or two a bit annoying after a while, but its interesting in these first few episodes that Jadzia doesn’t seem uninterested – she just knows it’s a bad idea. Which I agree with her, especially as her personality develops as the show goes on. In any case, Julian’s unrequited crush is a recognizable thing and not something only on Trek.

There is also a seen with Jadzia and Ben discussing their old friendship, but it doesn’t really have the same hold on the episode as the other two.  Keiko finds her way to be useful – she opens a school.  Julian continues to flirt with Jadzia despite knowing full well she’ll (amused however) say no.  There is one scene where Ben begins to tell Julian as story about Curzon, but it doesn’t really feel like it fit.

Also interesting in this episode is a murder mystery.  And its more cold case then Sherlock Holmes this time.  Julian is probably the closest to Data that we have (though no one knows it at the time) but he looks at the puzzle completely differently. It is somewhat interesting to see how evidence is collected.  In this case Odo is being framed for Murder.  Quark even defends Odo, much to the Bajorans surprise, who are all quick to question Odo’s innocence since he worked for the Cardassians.

It would be interesting to read what a criminaligist considers of this episode.  Does the science make sense? I’m wondering already at the lack of gloves and such in the examinations. Of course Starfleet has field generators and noninvasive methods of examination so maybe I’m thinking this over too much.

Overall this episode is good, which means DS9 is already doing better in its first season then TNG did in theirs.  They’ve learned from TNG’s mistakes perhaps?

I will say I find the mob scene, especially the allusion to a lynching, to be uncomfortable.

In the “Search for Augmented Julian” list, Julian doesn’t really seem overtly different in this episode but he at finally seems competent at his job.  The moment he reaches the right conclusion, which seems a leap from the last bit of data, might be a clue in that direction if he has higher-then-usual thought processing.